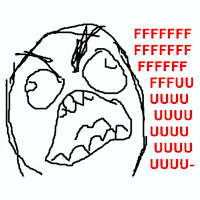 FFFUUU is a reaction game in which you have to avoid Internet trolls without exploding with rage. In the game, you are "Rage Guy", who is attacked by innumerable Internet trolls. The Internet trolls are represented by the well-known Trollface, which is often used in Rage comics and thus became famous.

Your goal is to avoid as many trolls as possible, as this will increase your score. But if you do catch one, it's not so bad, just don't let it become too many, otherwise you will completely freak out and the trolls will have reached their goal. Have fun playing FFFUUU, a free online game on Silvergames.com!