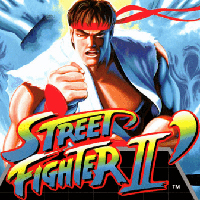 Street Fighter 2 is an online arcade fighting game where players have to defeat their opponents in a series of head-to-head matches. Choose your character and start an epic battle. Throw fireballs as fast as you can and jump to avoid our enemy's attacks. Keep an eye on the health bar in the top left corner. Once it becomes all red, your character will die. Move your fighter from side to side and don't get to close to the flying blue balls.

Play Street Fighter 2 CE online and for free on Silvergames.com. Enjoy retro pixel graphics and Mortal Kombat like sounds. Protect your hero using different kinds of attacks. Dodge and jump, punch opponents and throw fire shells to win every match. An addicting gameplay and easy controls make this game suitable for kids of all ages and adults. Much fun with Street Fighter II Champions Edition!