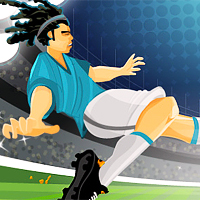 The Champions 3D is a cool World Cup Soccer 2010 game by Gamesheep. Lead your team through the 7 matches of the FIFA World Cup 2010 and win the finals to take the trophy! Control a player with the arrow keys, pass with X and shoot with C. If you are looking for a classic soccer game then you've come to the right place.

Just choose your favorite team and make them score one goal after another. Put crosses in front of the goal and send your strikers to the ball at the right moment so that no shot on goal can be blocked. Make your players perform at their best and never forget: only one team can take the trophy home, so you better make sure it's yours. Much fun with The Champions 3D on Silvergames.com!