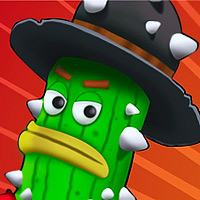 Cactus McCoy 2 is the sequel to the successful platform game in which a cactus has to make its way through the ruins of Calavera. Try the second sequel of this great online game, where you'll have to defeat a lot of enemies. The goal will be to rescue your new friend who has been kidnapped. The game includes 12 new levels and you'll have up to 75 weapons at your disposal.

Besides, various new mechanics await you. Also, don't forget to collect checkpoints and treasure chests during the game. With the money you earn, you can improve your abilities. In addition, the game offers entertaining gameplay and retro graphics. Have fun with Cactus McCoy 2, a free online game on Silvergames.com!

This is the Only Level 2