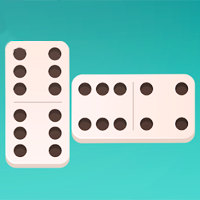 At the beginning of the game you meet three other players from all around the world. Each and every one of you has the same goal: to get rid of your domino tiles first. Whenever you have no fitting tile you can pass and skip the round in the hope of being able to play in the next one. Try to predetermine which tile is most valuable and better to keep for later and which one to get rid of right away. Have fun with Dominoes!