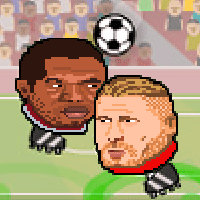 Football Championship 2016 is a super fun sports game in which you have to defeat you opponents in order to get the trophy. Finally, the new season is here! The sun is out and the grass has been cut, time to team up for the 2015-2016 Champions League in this cool installment of the popular soccer game series. Select from all the sports heads your favorite soccer player and let your first match of the Football Championship 2016 begin.

Also in this episode you'll have a number of upgrades at your disposal, which you can collect with the soccer. Freeze your opponent or make the ball tiny to make it even harder for your opponent. With your giant head, you can head the balls right into your opponent's goal. Have fun with Football Championship 2016 on Silvergames.com!