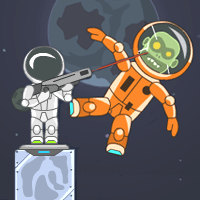 Ricochet Kills Space is a great physics-based puzzle game in which you'll have to shoot the astronaut zombies. This cool shooting game takes you into space, where a bunch of zombies in spacesuits have made themselves comfortable. Try to destroy them all in Ricochet Kills Space by firing your futuristic laser cannon so skillfully that you can hit your targets even behind barricades.

In each subsequent level, it will be even trickier to catch the zombies, since they hide skillfully. You only have a limited number of shots at your disposal, so think carefully before firing them. If you fail a level, you can simply try again. Are you ready to go to space? Have fun with Ricochet Kills Space, another free online game on Silvergames.com!