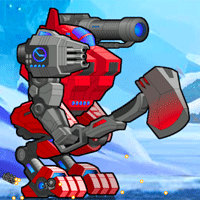 Super Mechs is a free turn-based robot fighting game where you can build a mech and fight against other online players. In the distant future there is only mecha battle. In Super Mechs you are in control of one such machine, build and equipped for one purpose: destruction of the enemy. Start a campaign and lead your super war robot into battle with an army of heavily armed steel giants.

In turn-based combat you will have to shoot, blast and fire your way through the opposition. In between fights, you get to upgrade and customize your mech. Spend your hard-earned coins on better weapons, better defenses, maneuverability and special abilities. Open up new slots on your robot to equip additional weapons on it. Unlock upgrade boxes that randomly dish out upgrades and equipment. In the world of Super Mechs only the strong survive. Enjoy this free robot fighting game on Silvergames.com!