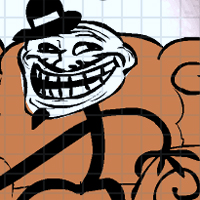 Troll Cannon is a fun physics-based action game in which you'll have to shoot one of the troll stick figures into a rocket as fast as you can with your troll cannon. But to do that, you'll have to sacrifice a few of the characters beforehand so that the obstacles are cleared out of the way. You can fire as many trolls as you want, so just go right ahead.

This fun puzzle game requires strategic skills and a clever mind to solve each level. The funny troll heads only want one thing: to escape from the level, whether via car, plane or rolling. Do you think you can solve every puzzle? Find out now and have fun with the super funny action game Troll Cannon on Silvergames.com!