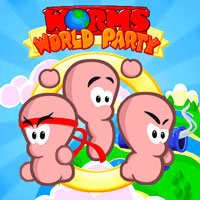 Worms World Party is a cool multiplayer aiming and shooting battle game in which you have to control an army of worms to win the war. This free online version of the game will take you back to the days when games were way more fun than pretty, forcing you to spend hours enjoying your favorite console.

Worms World Party is in fact the seventh release of the highly popular Worms series, and it was actually released for Gameboy Advance, Windows and Play Station. The simple, but incredibly fun and unique gameplay made a massive hit of this series of multiplayer battle games. You can play quick matches against the CPU or another player, start challenging missions or start a deathmatch against three other teams. Have fun playing Worms World Party, a free online game on Silvergames.com!