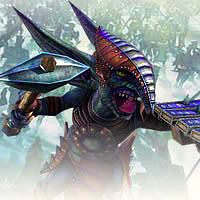 Battle for Darkness is another fantasy strategy game in which you have to fight an unholy war with bloodshed to start your evil reign of terror. Build up your army of cruel monsters and send those out to invade enemies country. The farther your troops come and the more opposing units they defeat, the more gold you will get. Use it to run upgrades or recruit new warriors between the battles. Much fun.