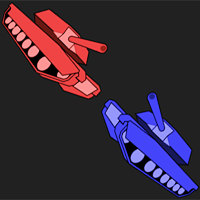 Battle Tanks is a fun multiplayer tank battle game with nice block graphics and a simple but amusing playability. You can play this shooting game online and for free on Silvergames.com. Enter a match and join a team to fight against other players shooting with your powerful cannon and collecting lots of power-ups.

You can also create your own arena and have other players join your match to try out your creation. In this battlefield simulation all that counts is a great aim and of course the will to survive. Be brave, lead your team to victory and have fun with Battle Tanks!