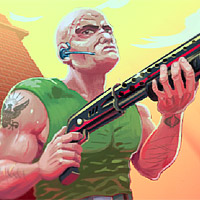 Creeping is an almost stealth action game in which you have to teleport yourself, shoot and sneak by your enemies in order to pass one level after the other. No matter if you attack your opponents from behind with a knife or shoot them in the face, it's your goal to eliminate all of them as fast as possible to you can move further and kill even more of them. This awesome action game features some amazing skills, like teleporting.

You can teleport yourself though walls or simply confuse your enemies by disappearing rapidly. Who wouldn't want to teleport themselves to another space and time and just be second to absolutely none. Once you loose too much vitality, you have to step away from the situation and gain new power or collect a power box to become healthy again. Try to kill all your enemies and become the smartest killer of them all. Much fun playing the fun online game Creeping for free on Silvergames.com!