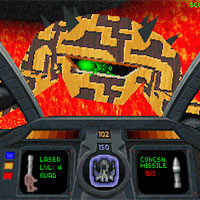 Descent is a fascinating retro first person shooter that was released in 1995 and is considered to be the first game to feature entirely true-3D graphics. Play this free online version on Silvergames.com and take on the role of a mercenary hired to eliminate the threat of a mysterious extraterrestrial computer virus infecting off-world mining robots.

Set in 2169, you will pilot a spaceship armed with powerful weapons, so you will be able to move in all directions. Try to shoot all your enemies before they destroy your ship and find a way through every level. Have fun playing Descent!

The Scale of the Universe 2