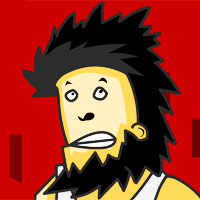 Hobo is a hilarious vertical platform game with a cool retro style, in which you control a poor homeless guy in the harsh streets of the city. Remember those classic arcade platform fighting games like Teenage Mutant Ninja Turtles or The Simpsons? Well, replace the heroes with this funny tough guy, and the villains with innocent bystanders and you'll have hours of fun with this free online game on Silvergames.com.

When you've been living on the streets for a while, manners and appearance may take a backseat. Hit and spit on your enemies and anyone you pass by on the street. Unlock combos to punch, kick, fart and burp, throw trash cans, and keep running to find out what awaits you. Have fun playing Hobo!