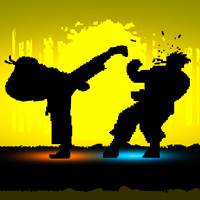 Shadow Fights is a cool vertical fighting game for 2 players that lets you challenge your best friend in exciting one on one duels. In this free online game on Silvergames.com you will get the chance of controlling a martial artist to fight against another player on the same computer, or against the mighty CPU.

Combine jumps, punches and kicks to knock your opponent out before you are the one who bites the dust. No weapons, super powers, deadly traps, gaps and nobody else but you and your opponent will get in these thrilling, clean fights to see who is more skilled. Have fun playing Shadow Fights!