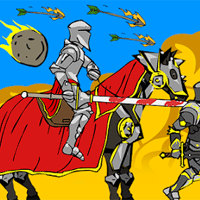 Age Of War is a fascinating survival game in which you have to defense your base and you can play it online and for free on Silvergames.com. It's a tale as old as time. You want to kill the other guy, so you spend all your money on training mindless cannon fodder to walk into enemy fire and do your bidding. Now Age of War allows you to do just that without having to spend a fortune!

From the barren plains of the stone age to the futuristic war-torn hellscape of the future. Send wave after wave of infantry, artillery and cavalry into battle against the fortified base of your enemy. Equip your own base with turrets to gun down their soldiers, and as you learn more about warfare upgrade and evolve your military capabilities. Until you can finally beat your opponent and win this endless war! Be careful though, Age of War can be incredibly addictive! Have fun!