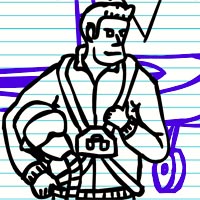 'Line of Fire' is an awesome side-scrolling action shooter with hand-drawn graphics and the voice of Arnold Schwarzenegger. Your mission is simple: Pilot a jet plane and create massive destruction as you blast your way through the enemy ranks. Shoot, destroy and don't get into the line of fire.

Fly above the enemy's territory and destroy everything by dropping bombs, firing guns and missiles. You can also use a special attack to shoot down helicopters and other attackers. Use afterburner to fly faster and keep an eye on the health and ammo bars. Have fun playing Line of Fire, a free online game on Silvergames.com!