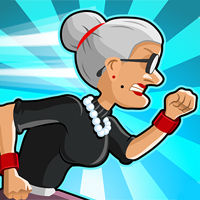 Angry Gran Run is a free running game where players have to control an old lady and help her to reach the finish line on every level. After the granny breaks out of the Angry Asylum she is on the loose. Help her to knock down brutal punks while she is running along the street. Make her overcome disturbing obstacles to keep her running in the cool online game Angry Gran Run.

Try to accomplish one of the missions or choose one of the daily tasks.

Running a given distance or collecting a given number of coins, these are the possible missions. The speed will increase as you proceed in the game and it will more difficult to avoid the objects on the road. Collect coins while running to boost your score. There's also a series of letters you can collect and then spell a word which will give you a further boost. A T-Rex can appear randomly so pay attention and don't let him catch you. At the end of the course you can use the earned money to purchase upgrades and buy new costumes for the granny. Have fun with the free online game Angry Gran Run on Silvergames.com!