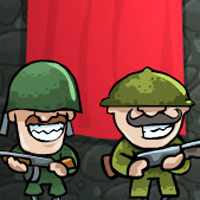 Artillery Rush is a cool physics-based puzzle game in which you'll have to blow up all the enemy soldiers with your selected team. So don't waste time but attack the enemy artillery with your big cannon. Select your military unit and go on your mission to attack and defeat enemies. Launch your cannon in order to destroy opposing bases and kill other soldiers.

Try to use as less bullets as possible and earn up to three stars. You can determine the direction and power of your shot with the mouse to hit your enemies where it hurts. Shoot strategically smart and trigger chain reactions that will cause as much damage as possible. Are you ready for this cool puzzle game? Have fun with Artillery Rush, another awesome online game on Silvergames.com!