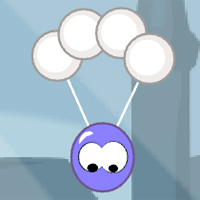 Base Jumping is a funny online challenge, where you have to control a ball jumping with a parachute. Base jump against the best players in the world and become the king of extreme sports. Your aim is to be the first who lands.

Beat your opponents by being the first to reach the ground. There are different leagues in the game. Win to be promoted to the next league. After level five, you will have to compete against the king. The first player to land gets 10 points, the second 7, the third 4 and the last one 0. The tricky part is to catch the right moment to open your parachute. Not too early and not too late. And don't you dare jump before the signal. Get points by medicine and upgrades. Have fun with a free online game Base Jumping on Silvergames.com!