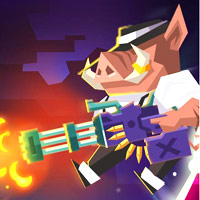 Bullet League Robogeddon is a fascinating vertical shooter in which you play as some sort of badass pig detective that kills robots all over the place. You can play this game online and for free on Silvergames.com. Take on the role of this cool character, enter the battlefield, arm yourself and start shooting at those annoying robots before they get to shoot you down.

There are different kinds of weapons and you also have the ability of collecting stone to create blocks and protect yourself or to trap your enemies. Try to get rid of all the robots and stay the hell away from the danger zone or you might lose the game. Have fun playing Bullet League Robogeddon!