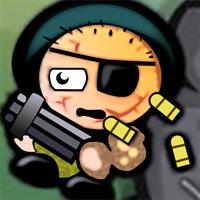 City Siege 3: Jungle Siege is another sequel to the fun physics-based shooting game and again you can play it online and for free on Silvergames.com. Help the goodies against the baddies. In the third chapter of City Siege you have to ward off evil powers, because they want to take over the Jungle. Expand your troops and fight against the invading army.

Click on a unit in order to select it and use the cursor keys WASD keys to control the unit. Use your mouse to aim and click to shoot. The Baddies have their backs to you, so just take them out once you've aimed well. Don't forget to collect stars to upgrade your troops and be careful not to harm the civilians. The loss of civilian life will incur cash penalties. Are you ready to master this brand new episode of City Siege? Find out now and enjoy City Siege 3: Jungle Siege.