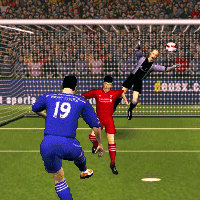 Imagine a football game with all the passes and fouls cut out, and reducing it only to the exciting shots at the goal. That's what you get in England Premier League. Pick your favourite team of the 2015-16 Premier League and take them to the top. You will have to block shots your computer opponent takes at you. So make sure your goalie doesn't end up a lame duck. But the only way to win is by scoring some goals yourself. Outsmart the defense and trick their keeper! Will your shot hit the net? Find out in England Premier League!