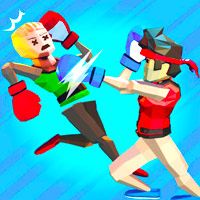 Funny Ragdoll Wrestlers is a fun two buttons boxing game for 2 players in which you get to control a ragdoll to throw punches at your opponent to win the fight. This free online game on Silvergames.com gives you the chance of fighting on different rings with deadly traps on the sides and control your arms as fast and precise as possible.

Try to punch your opponent as much as you can to push him to his end of the ring and fall down, or to knock him out in order to win a fight. The first one to win five fights wins the match. Enjoy this game playing against the CPU or against a friend on the same computer. Have fun playing Funny Ragdoll Wrestlers!