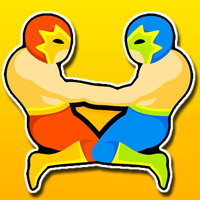 Wrestle Jump is a free 2 player fighting game where players have to hit the opponent's head to the floor. Make your athlete jump on one leg and try to push the other wrestler to the wall. Make him hit the ground or borders of the playfield to win. You can play against the computer or together with your friend. Choose the multiplayer mode to fight other online players from all over the world. In the cool online game Wrestle Jump, every player has 5 attempts. The first wrestler who wins five matches wins.

This funny game is easy to learn but hard to win. If you are tired of figuring out which keys to press in order to move your character, then this is just perfect for you. Just concentrate on one button and try to knock out your opponent by hitting it at the right moment. No matter if you are playing against the CPU, your best friend or players from all over the world, the aim stays the same: make your opponent hit the floor before you do and you will master this game in no time. Enjoy this cool free wrestling game Wrestle Jump on Silvergames.com!