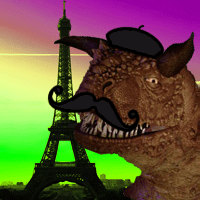 Vive la France?! Not on T-Rex's watch! Not finished yet with his trip through Europe the human flesh loving dinosaur goes evil again. Decorated with two horns on top of his head he wants to stop for a bite to eat in the city of love. Play Paris Rex, the latest sequel of the crazy and wild destruction game series and strip down the french capital. Rip humans up, smash things and eat gas bottles to spy fire until there is no stone left standing in Paris. Much fun!