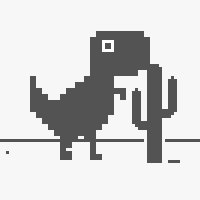 T-Rex Game is an online version of the famous offline long-distance running game by Google and you can play it online and for free on Silvergames.com. The by now well-known easter egg of the popular search engine Google has you control a T-Rex on their morning running routine. Despite their small arms, they give their legs a real workout by steadfastily heading to the right of the screen. Along the way there will be a number of obstacles making dino life difficult for our little running friend. You will have to jump over rocks, cacti and even duck under low-flying pterodyctyls. These prehistoric ancestors of today's birds can ruin a great run like nobody's business.

Time your jumps right, and stay low when you have to in order to run as far as possible. It is going to take steady concentration and quick reflexes to keep going. Your dinosaur buddy is not going to slow down any time soon. Instead they will continue to speed up until they run into an obstacle, making the dinosaur game faster the further you progress. It will not take long and you will be speeding down the track at record speeds. With every step you take your score will go up. With every hundred points you pass, a bell will ring to signal your colossal achievement to the outside world.

It's just one more challenge on your track-and-field victory. The best thing about this T-Rex game is that it won't suddenly stop, just because your computer or mobile has a stable connection to the internet again. So put on your long-distance running shoes, get those tapping fingers stretched and ready and start your marathon as history's most recognizable creature of Earth's prehistoric past. Don't let your running Tyrannosaurus turn into a fossil, keep jogging, running and jumping to get that ever elusive high score. Have fun with T-Rex Game!