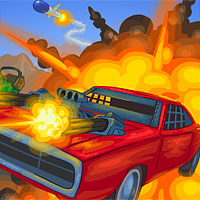 Road of Fury is a cool shooter game in which you have to defend yourself against enemy attacks. As you drive along the Road of Fury, you'll be attacked by heavily armed enemy forces from the air and from the ground. Shoot at them with your gun, but note that the mob reacts furiously and is eager to kill you. This highway is especially dangerous, because the enemy has only one goal: to kill you immediately!

And thus you will be attacked not only by heavily armed bikers, but also from above. Try to survive as long as possible and quickly shoot your attackers before they finish you off. The further you get, the more points you collect, from which you can get upgrades, weapons or new vehicles. Have fun with Road of Fury on Silvergames.com!