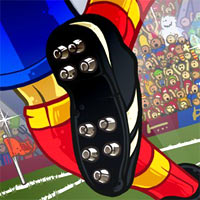 The Champions 4 is a pulsating battle on the pitch for nothing less than world domination! Customize your soccer eleven and lead your team to glory. Move your players across the field, pass the ball as often as you can and score goals or defend. You have several missions, which you have to fulfill, like scoring your first goal, buy something from the skills shop, win your first match, win three games in a row or score three or more goals in one match.

You can also upgrade your speed, power, accuracy, coach and boosts. Try to win all matches to lead your team of champions to victory. Defeat all rivals to win the championship in the fourth installment to the cool fifa World Cup soccer game. Much fun playing on Silvergames.com!