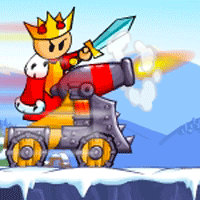 King's Rush is a great distance game in which you'll have to drive the king as far as possible on his battering ram. After winning numerous battles in the Valley of Winter, the king longs for sun, beaches and pretty hula hoop girls. Help him reach his destination quickly in King's Rush. Simply choose a battering ram, pimp it out a bit with the gold at your disposal and off you go on an action-packed ride.

The further the ruler gets and the more he destroys, the more money you'll collect to either buy more robust battering rams or more upgrades. Jump over snow mountains, collect coins and destroy everything in your path to get as far as possible. Have fun with King's Rush on Silvergames.com!