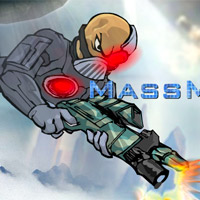 Mass Mayhem 2099 AD is the bloody sequel to the popular series and this time you will be introduced to the future of a disordered world! Prepare yourself to go on a crazy killing spree destroying everybody and everything on your path. Mass Mayhem 2099 AD features more cool weapons and an ultimate killer mech.

The year is 2099, the world as we know it is destroyed, the government is infiltrated by power-hungry crooks. In the fight against corruption, only you are left. With a heavy gun and a deadly robot fighting machine, set out to destroy everything and everyone around you, unleashing the ultimate mass chaos. Much fun with Mass Mayhem 2099 AD on Silvergames.com!