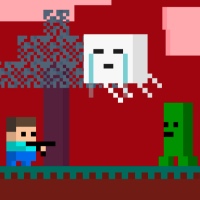 Mine Shooter is a cool shooter game in which you have to defend the Minecraft world against a horde of enemies. Today, the blocky world challenges you to prove your shooting skills. For this purpose, you have a lot of weapons at your disposal, such as assault rifles, pistols, sniper rifles, shotguns, submachine guns, grenade launchers and bazookas. So what are you waiting for?

Try to shoot the invaders before they explode, causing you damage. Avoid the giant stone golems and defend yourself as efficiently as possible. Shoot the creepy skeletons and watch out for the huge hordes of zombies. Do you think you can survive this game? Find out now and have fun with Mine Shooter, a free online game on Silvergames.com!

Load Up and Kill