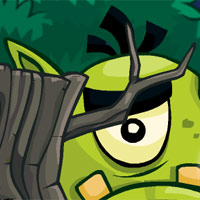 Roly-Poly Cannon: Bloody Monsters Pack 2 is a great puzzle game in which you create your own level or select one of the given ones. In this explosive sequel to the second package of the Roly-Poly Cannon game series you won't get bored to death. Your object is quite simple: aim and launch your dangerous cannon to eliminate all those ugly creatures.

Your job is to shoot all the creepy monster heads off the platforms with the Roly-Poly cannon or blow them up using the high explosive ammo. Either way, the bloody fate of the funny creatures is sealed! Do you think you can master every level and make it to the end of this fun cannon shooting game? Find out now and much fun with Roly-Poly Cannon: Bloody Monsters Pack 2 on Silvergames.com!