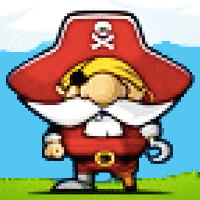 Siege Hero: Pirate Pillage is a super fun destruction game and you can enjoy it online and for free on Silvergames.com. Wipe out the pirate mob, protect the innocents and loot some gold barrels in another Siege Hero game. In this sequel to the fun physics-based destruction game it's your goal to destroy the ship and the travelers with as less attempts as you can.

Shoot stones and other dangerous ammo to win Siege Hero Pirate Pillage. Before you start shooting like a crazy person, you should think well and strategically in order to destroy everybody you have to and protect the innocent. Are you ready? Find out now and much fun with Siege Hero: Pirate Pillage!