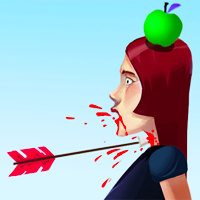 Try not to kill your friend or it might turn into a violent blood bath. Set the perfect direction and power, each time you hit the apple, you’ll step a bit further, so it gets harder each time. How many apples can you hit until you become a native-american assassin? Have fun with Apple Shooter Remastered!