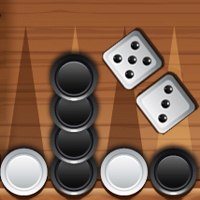 Backgammon is a fascinating strategy board game with dice and tokens, which has been played for thousands of years throughout the world. The history of this simple yet brilliant turn-based game goes back nearly 5,000 years. Nowadays, you can not only play it on some fancy looking boxes that open in the middle, thus forming the board you play on, but you can also enjoy it for free and online from your computer. Play challenging matches against the CPU and select the difficulty level that suits your knowledge, the amount of points for each game and the color of your tokens.

The rules of Backgammon are as simple as they are captivating. Every match is one player against another, with each player starting at an opposite end of the board. Your goal is to get all your checkers to the bottom right, which would be your opponent's starting point. The first player to clear all tiles wins a game. In each turn you will have to throw 2 dice and you will be able to move some of your tokens, depending on what you have thrown. You can use one die to move one of your tokens, and the other one to move a different or the same token. You cannot move into spaces blocked by your opponent, that is, where there are already 2 or more of his tokens. If you move one of your tokens onto a space with only one of your opponent's tokens, his token will be captured and he must release it from its starting point on his next turn, only if the dice allow a movement.

Don't worry if you couldn't understand this short, little rulebook, as the intuitive dynamics of this classic game will help you learn quickly after just a couple of turns, so don't wait any longer and start playing! Just roll the dice, move your tokens to the end and avoid leaving them vulnerable or your opponent will capture them. Have fun playing Backgammon, another great free online game on Silvergames.com!