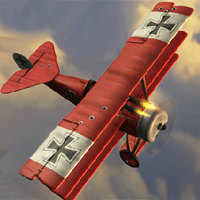 Dogfight 2 is a free World War 2 airplane fighting game where you control a heavy armed biplane. Haven't gotten enough of the Great War? It's time for the next dogfight in the air in this great WW2-themed shooting game. Fight for the Germans and get a rid of all enemies to restore the freedom. Note all background information before each mission and perform awesome maneuvers while shooting as much opponents as you can.

The second sequel of this adrenaline pumping shooting game is finally here. You fight as a hunter for the German Air Force and it is your task to destroy all opposing aircrafts while shooting at them from above the sky. Can you eliminate all opponents, without being shot yourself or crashing into the ground? Find out and have fun playing Dogfight 2 on Silvergames.com!