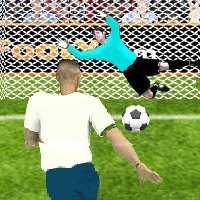 Penalty Shooters is a free online soccer game on Silvergames.com where players have to score penalty kicks. Put your speed and reaction skills to the test and lead your team to victory. Set the direction and height of the ball with just a mouse click. In this cool game, you can either be a football player kicking the ball or play the role of a goalkeeper.

Get ready for another cool penalty shoot-out challenge. Pick your league and team first. Go the penalty mark and kick the ball as often as you can into the goal. Determine the power of your shot and choose the right moment to release. You have 5 attempts, so try to concentrate and don't miss a single ball. Kill the keeper to win the match and lead your team to glory in this fun physics-based soccer game Penalty Shooters. Play as a striker or a defender and have fun!