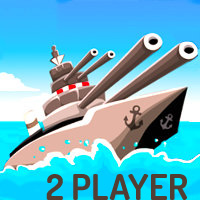 Battleship 2 Player is a classic board game for two players in which you estimate positions of enemy ships. The rules of this guessing game are simple: One player places boats on a grid, the opponent does the same. They both have to guess where the enemy's battleships are placed by switching turns. First one to sink all rival's ships wins the game.

Almost everyone knows this iconic game and has most definitely played it with his friends while sitting at the same table, facing each other and hiding your grid. In this cool online version for 2 players you can play against people from all over the globe or just play for fun against the CPU. Shoot on a square, if you hit, you’ll know where to shoot next. If you miss keep trying until you spot a boat. Be the first to sink all enemies and win every battle. Enjoy playing Battleship 2 Player on SilverGames!