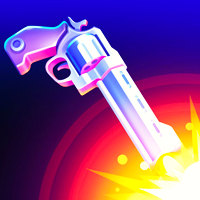 Just tap the screen to make your gun shoot, pushing itself in the opposite direction. Your goal is to reach as high as possible, collecting lots of coins, boosters and bullets. There is a green booster which will catapult you higher in the air. Moreover you can collect individual bullets as well. Those are important, because once you run out of bullets you won’t be able to shoot. Use your coins to buy new, better weapons, like a ray-gun or even a bazooka. Enjoy Flipping Gun Simulator!