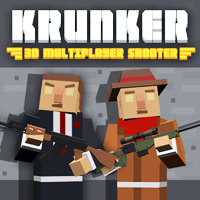 Krunker is a block-style multiplayer shooting game created by Sidney and Vincent de Vries and you can play it online and for free on Silvergames.com. Play as a sniper, hunter, marksman, heavy gunner or assault trooper against the rival team and try to kill as many enemy players as possible. Krunker.io is filled with clever maps and a wide range of weapons to choose from. Sniper rifle, submaschine gun, shotgun or rocket launcher - what's your favorite gun in this cool io game?

Customize your Krunker game avatar and face heavy gun fire from all four corners of the world. You will have to carefully sneak around the level to avoid getting shot. Peek around corners and fire at enemy krunkers from an advantageous vantage point to win the match. Do you have the lightning fast reflexes and steady aim it takes to win?

(Lire la suite ..)Don't forget to check the cool mods available on krunker.io. Some online soldiers prefer the more scattershot approach of a machine gun. There is a fitting firearm for every player type out there. On top of that you get to play against skilled players from all over the world thanks to the online multiplayer mode. Keep moving, keep shooting and always keep an eye out for rivals trying to sneak up on you. Enjoy Krunker!