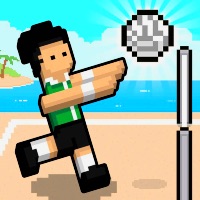 Volley Physics is a fun addicting one button volleyball game for 2 players in which you control two players simultaneously. You can play this game online and for free on Silvergames.com. Step up to the court and control your terribly clumsy team of players to hit the giant ball all the way to your opponent’s side. Whenever the ball hits the ground, the opposite team earns a point.

Try to score five points to win the match. Whether footballs, volleyballs or bombs, just bump them with your players’ heads to the other side of the court and try to win match after match against the CPU or against a friend on the same computer. Have fun playing Volley Physics!