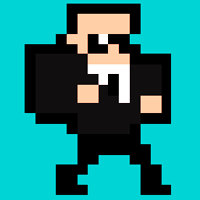 Superfighters is a cool martial arts fighting game inspired by games like Street Fighter. You can choose your favourite character from a vast variety of pixel heroes. Select a stage and the amount of fighters in the arena then let the fight begin by pressing the space bar. Do you think you can win against the computer? Kick some ass and don't let them hit you! After some time you will be able to collect different kind of weapons in each stage, like an assault rifle or a flame-thrower.

The key to winning in this game is staying focused and using the surroundings to your advantage. You will notice that in some stages there are explosive barrels standing around so just shoot them while your enemy is near them and you can see him go up in flames! Or use the other items standing around like chairs and tables. Hit those with your melee attack and watch them damage your enemy! Are you the king of the Superfighters? Good Luck!