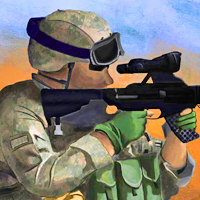 Warfare 1917 is a great war game and you can play it online and for free. You know what's fun? Trench warfare during the first World War! With Warfare 1917 you get to watch your friends, family and fellow countrymen get blown to smithereens in pursuit of moving some imaginary line across the ground! Keep sending out waves after waves of soldiers as they are mowed down by the budding industrialization of war. After every victorious battle you get to upgrade your units and the technology with which you decimate the opposing army.

Would you like some mortars? Maybe highly efficient machine guns? How about some toxic gas? There's really no limit to machinized mass murder on a grand scale in this brave new world of Warfare 1917. Upgrade your infantry & armour and your fire support so your opponents don't stand a chance and you can celebrate a victory after each an every battle. Have fun with Warfare 1917 online and for free on Silvergames.com!