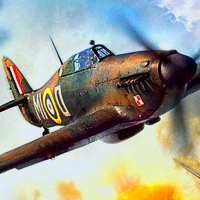 Air Battle for Britain is an intense airplane war game and also was one of the most famous battles of World War Two (Luftschlacht um England). England, August 30th of the Second World War. Take to the skies as fighter pilot Paszkiewicz and defend your homeland England against the German Luftwaffe. Do you have what it takes to win the Battle of Britain?

Take control of Polish airmen of the 303 Squadron during World War II. Play with friends or fight against other human opponents in multiplayer mode. Use arrow keys to control your plane and press Z to increase to full throttle. Press X to fire machine guns. Much fun with Battle of Britain, another great online game on Silvergames.com!