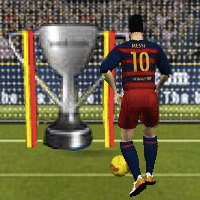 Spanish Liga 2016 is an awesome soccer game in which you have to win one match after the other. Christiano Ronaldo and his biggest competitor Lionel Messi are set to renew rivalry in this physics-based soccer game. Help them to duke it out for the Spanish Liga 2016 supremacy. Choose the team with which you want to play and win the 2016 la liga!

You have to do both; shoot penalties and defend your goal. The league with the highest score ascends to the next level! Click your mouse to set the direction of your shot and react quickly to make your goalie jump in the correct direction to block each shot. Are you ready for this sports challenge? Have fun with Spanish League 2016 on Silvergames.com!