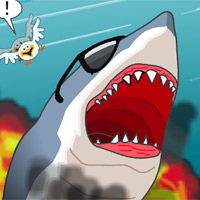 Sydney Shark is a cool destruction game and the sequel of Miami Shark. The mission of this addictive shark game is to eat or destroy anything that moves on the beach of Sydney. To perform a super jump dive deep and then come up fast. Control a hungry and bloodthirsty shark and bring panic to the city of Sydney.

Jump on boats and other things to break them. Destroy six objects in a row to spin the wheel of shark and get power-ups. Try to pull aircrafts down into the water by biting them. Try to bite all the objects, animals and people appearing on the screen to get the highest score. Don't forget to collect a cool hat for your shark and maybe you will even be able to save the world by absorbing a nuclear weapon. Have fun with a free online game Sydney Shark on Silvergames.com!

Getting over Snow
❯
Exit Fullscreen