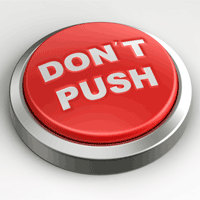 This is the World's Hardest Game 4. Its difficulty is so extreme it is known to have made grown men weep in despair, and women even start putting up with men at all. Don't be fooled by its classy old-school look of moving squares, swinging circles and rectangular walls. This is a game that demands incredible precision from its players with no room for errors. Like parallel parking during a snow storm. Avoid the lethal blue circles patrolling the level or rigidly blocking the obvious route to the exit. Stick to the checkered paths so as not to fall off into the abyss below. Occasionally you might get a short respite by moving onto a green safe area. But don't get complacent, there are bigger and more unforgiving challenges waiting for you. There's water, ice, circular movement patterns and so much worse. Are you ready to give up yet? No? What are you some kind of achievement extremist? Are you Tom Cruise? Whoever you are, you will definitely find yourself pushed to the limits of your ability, patience and willingness to endure failure with this game. Keep your windows closed, if you're easily frustrated. It's also a good idea to have another keyboard and possibly another computer screen nearby in case of inexplicable accidents or things breaking for no discernable reason. This is the World's Hardest Game 4. Just in case, you weren't convinced the first three times around. It's really, really difficult. The labyrinth awaits and it demands your countless deaths as tribute. Have fun!

5 Minutes to Kill Yourself: Reloaded

Day of the Tentacle