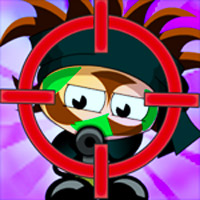 City Siege Sniper is another sequel to the popular physics-based shooting game made by thePodge and you can play it online and for free on Silvergames.com. Your city is under siege and you are as a sharpshooter the last chance to rescue all hostages. Do you think you can kill the bad people and keep the good ones alive?

You only have a certain amount of bullets for each stage so think well before firing them. You need to destroy the whole building and kill everybody in there as long as they belong to the evil crew. It's quite tricky to keep the innocent ones safe while the whole building is breaking down. But you can do it, right? Good luck with City Siege Sniper!